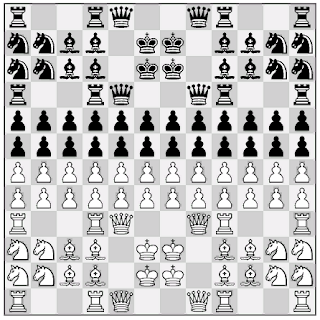 Each player has:
4 Kings
24 Pawns
8 Knights
8 Bishops
8 Rooks
4 Queens
White and black occupy the 1st-6th and 7th-12th ranks, respectively, as shown in the diagram.
White starts the game first.
The game uses four dice.
Opponents make moves alternately, throwing 4 dice. The piece to move is determined by a die:
1 = pawn, 2 = knight, 3 = bishop, 4 = rook, 5 = queen and 6 = king.
The player makes four moves at the same time based on the indications of the dice and has the right to refuse any move that does not suit him, unless it is a pawn move. Exactly! Unlike in regular dice chess it's allowable to pass moves. And this rule was already applied about a thousand years ago in old variant of Shatranj (Shatranj al-Mustatîla or Oblong Chess), the Arabic pre-decessor of modern chess. However it's not allowed to pass on pawn-moves, except when they are blocked.
Chess pieces move across the board as they do in ordinary chess - according to the standard rules of move and capture.
The only minor exception is for a pawn that is not allowed to move forward two squares from its starting position.
Upon reaching the last rank, the pawn can be promoted to any piece except the king and itself.
There is no castling, check and checkmate in the game.
The goal of the game is to capture four enemy kings.
at January 31, 2022
Email ThisBlogThis!Share to TwitterShare to FacebookShare to Pinterest
Labels: board game, chess, chess variant, dice, dice chess, game